Another Gun Show, Another Mauser

There's a lot I enjoy about attending gun shows, there were two local shows in the past two weeks, have I had my fill? Not even close. Have I spent WAY more money than I should have? Hell yes. But living life to the fullest and taking pleasure from your hobbies is what it's all about. So even though I went over my allotted gun collection monthly budget (it's not a set amount), I made out pretty good at the two shows.

The gun show this weekend was the  Provost Gun Show held at the El Maida Shrine in El Paso. As far as gun shows go, it's a small one with regards to square footage and number of vendors, but as with any gun show, you'll never know what treasures or great deals you might find. Sometimes I'll attend a gun show and nothing will catch my eye, however, I will usually buy some ammo because I like to support the "mom and pop" small businesses. Today was not one of those days, today I ended up making out pretty good, in my opinion.

I had spotted a nice looking Mosin Nagant M44 that was being offered by an old timer in a cowboy hat. He had it listed for $275 and I asked it he would take $250, he said no, but his counter-offer of $260 was really tempting. I had recently purchased an M38 and didn't really NEED another M44 as I already have two of them and a total of five Mosin Nagant Carbine variants. I hesitated, left the show and regretted that decision. Fast forward to today, different gun show, different city, the same vendor had a table today. And while he no longer had the M44, he did have a very nice Yugoslavian M48A Mauser.

When it comes to Mausers, I'm in the same boat as with my Mosin Nagants, I have a nice collection and don't really NEED any more. But you collectors know how that goes, WANT almost always trumps NEED. He had this M48A listed for $345, which is a fair market price given sale prices I've seen recently, however, what fun is buying at a gun show without a little haggling? I offered him $320...

The cowboy hat wearing old timer only needed about 15 seconds to debate my offer before he accepted. I made my way to the nearest ATM and withdrew the cash. 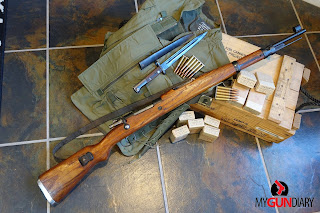 I would have left the gun show feeling content at that point but as I was making my way to the exit two more tables caught my eye. The first was a unique table featuring an assortment of historic military uniforms, accessories, magazines, medals and books, all from the World War II era it appeared. The vendor noticed my newly acquired Mauser slung over my shoulder and broke the ice by asking which model it was. We got to talking a bit and I told him how I had just joined a Facebook page for World War II German Army Reenactors and that I have been wanting to get into reeanacting but for the expensive cost of the uniforms and gear! 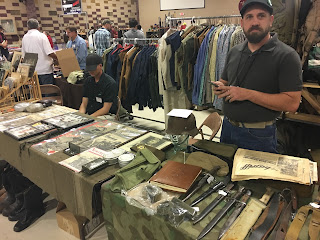 After shaking hands and introducing ourselves properly, Shaun and I continued our conversation about reenacting and he told me that he also had an interest in Russian and British World War II reeneacting, basically, he was into any and all of it. He gave my Mauser a once over then dug into a box that was under his table and pulled out a Preduzece 44 Mauser bayonet and scabbard and said I could have it! Of course, I attempted to decline his very generous gift but he insisted, stating that he was sick of looking at it and was dying to give it away. Well, I couldn't very well accept a gift like that without reciprocating, so I gave him my card and number and said I was happy to make a new friend and that I'll gladly buy him a beer some time. And with that a new friendship was made and I had a smile on my face with my M48A Mauser and... bayonet.

As if that weren't enough, several tables away, across the isle, there was a vendor selling ammo, one box of which caught my attention. He had an ammo can with surplus Russian 8mm Mauser ammo, boxes of 15 rounds on stripper clips for the very low price of 5 boxes for $20. I'm no dummy, that's a good price, so I gave the man my last $40 for 10 boxes, or 150 rounds.

As a collector, I feel great satisfaction in rounding out my Yugoslavian Mauser collection which can now boast an M48, M48A and M48 "BO" on top of my 24/47's and other assorted Yugos.

Stay tuned to my YouTube channel as I'll be featuring these rifles in some upcoming videos. Please take a moment and subscribe - https://www.youtube.com/channel/UChBxtFjaljKgXhFvYt3OLQA 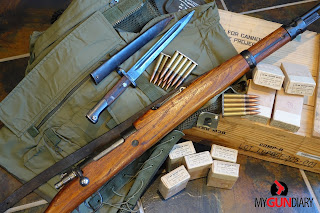 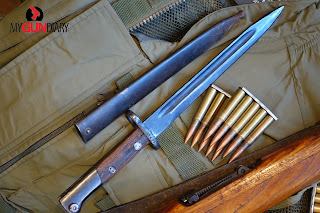 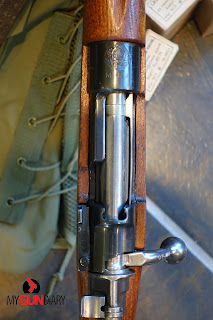 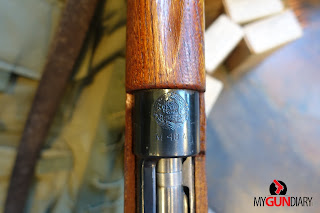 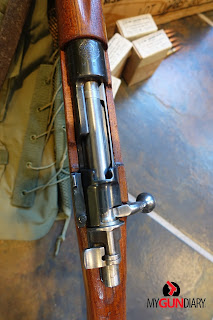 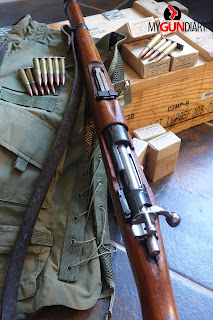 Posted by FelixGPhoto at 4:27 PM