Left-Leaning Types are So Self-Righteous and Love to Skew the Facts Don't They?

One of the things I love about Facebook thread comments posted by left-leaning types, is that they inevitably reveal themselves for their true nature, which is most often characterized by their self-righteousness and their mindless willingness to ignore true facts and skew said facts to fit their view and narrative.
I offer as an example the following thread posted by a Facebook "friend" who is very much an angry left-leaning Trump hating type. The post is in reference to the Kenosha incident and the now infamous 17 year old, Kyle Rittenhouse. As I have done in previous similar blog posts, I will break down the comments bit by bit and I'm sure you will see the self-righteousness and skewing that I am talking about... 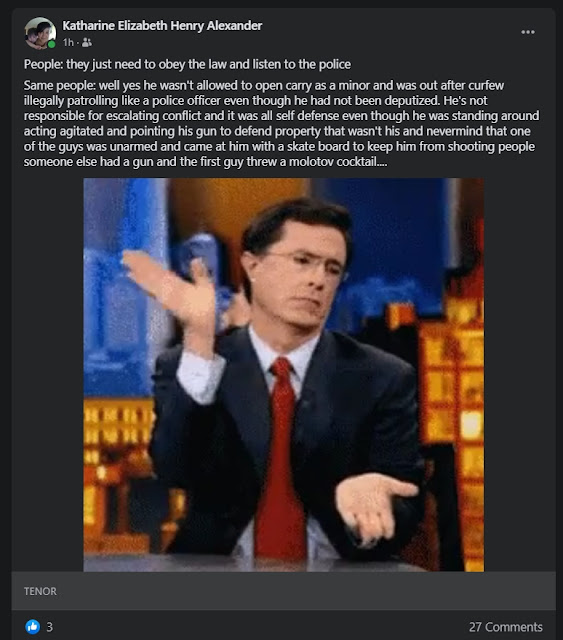 This person is frustrated with what she views as a double standard when it comes to people who comment that others "just need to obey the law and listen to police". What that has to do and how it might related to the events in Kenosha, I'm not sure. But she digs herself quite a hole with her numerous inaccurate statements.
Let's start with this one: "he was standing around agitated and pointing his gun".
There is no evidence to support this whatsoever. Zero. No videos showing him agitated and/or pointing his gun, no witness statements. There is evidence to the contrary, however, that shows Rittenhouse as calm and he is even interviewed several times prior to the shootings and he is shown to be quite calm during those interviews, he also states his intentions and reason for being in the area. To further counter her claim, there is video evidence that shows other parties, including the first person that Rittenhouse shot, Joseph Rosenbaum, to be highly agitated. https://youtu.be/eNlAa9b5Vak
So right there, you can already see how a "lefty" just skews the facts without any evidence. But let's move on to the next juicy tid-bit: "nevermind that one of the guys was unarmed and came at him with a skate board".
You mean the skate board that Anthony Huber tried to slam into Rittenhouse's head? I'm not sure what world this person lives in, but a skate board can be, AND WAS, used as a weapon, so clearly, he wasn't "unarmed". And then to cap it off, she contradicts herself somewhat by stating that "someone else had a gun (and fired first) and the first guy (Rosenbaum) threw a Molotov Cocktail. Well, at least she got that right, but in doing so, she almost makes the argument FOR SELF-DEFENSE.
Was he, as a 17 year old legally allowed to possess that rifle? It appears according to Wisconsin law, no. Should he have been in that area to being with? Probably not. But that's neither here nor there because none of those people should have been there, really. But as one who likes to consider myself a logical thinker, who prefers to weigh the facts and evidence before formulating an opinion, I had to call this person out on their skewing of said facts... 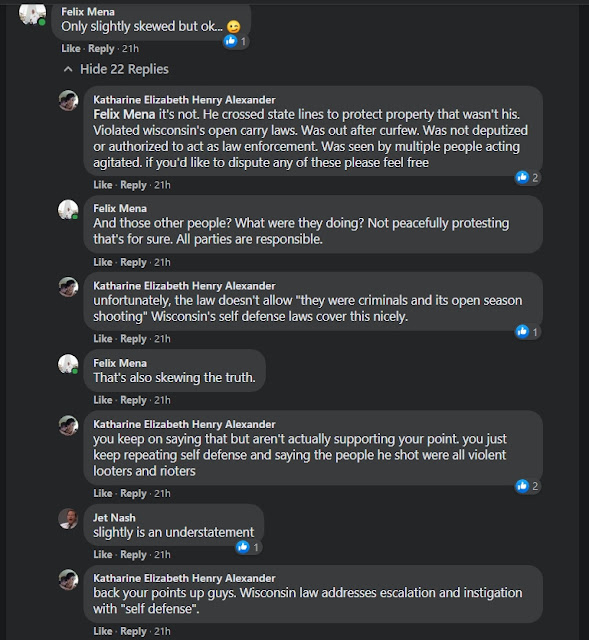 It doesn't take much to get the wheels rolling with the lefties, they're so angry. As you can see, I commented: "Only slightly skewed but ok..." I even included a smiley face.
She tries an end around with her reply by only mentioning the parts of her post which are factually accurate but naturally, she neglects to mention the parts that she has skewed or just gotten completely wrong.
She goes down her self-dug rabbit hole even further with her next comment, "unfortunately, the law doesn't allow "they were criminals and its open season shooting"...
Now this latest comment completely reveals her, already fairly obvious, point of view, which is that she is of the opinion that 17 year old Kyle Rittenhouse committed premeditated murder. This was her reply to my catch all statement that all parties are responsible. No where do I suggest that armed citizens defending businesses have a right to shoot anyone just for the sake of shooting a criminal. But she makes that leap, which comes as no surprise. That's what lefties do, such as when they assign the label of "racist" to anyone that supports Trump.
Notice what she does next, she assigns the task of supporting my suggesting that she's skewing the facts to me, disregarding the fact the she has neglected to support any of her contentions. She's completely oblivious to the obvious fact that all of her assertions are false! So I once again point out that she's skewing the truth. Then she goes on to say that I keep saying that and I "just keep repeating self-defense and saying the people he shot were all violent looters and rioters".
Well, I've got news for her... THEY WERE.
Are you beginning to see just how blind these people can be?
"Back up your points guys"
How about you back up YOUR points?
One of the things I love about lefties on social media is that they can rarely avoid inserting their foot into their mouths. I knew from the onset, that my first, simple comment of "Only slightly skewed but ok..." would result in a deluge of upset lefties coming out of the woodwork, and they did. Review the screen shot below and we'll continue this analysis. 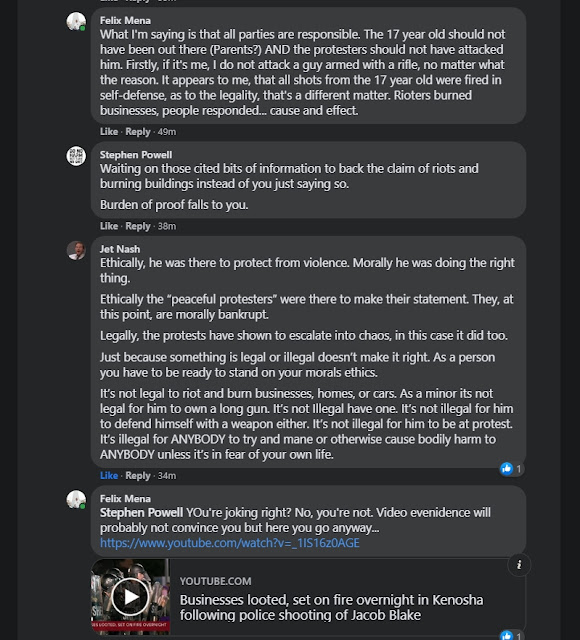 I do my best to stay as neutral as possible when it comes to debating events such as what happened in Kenosha. I do not believe any of my comments are anything but matter of fact. But just look at how far removed this next guy is from reality, one Stephen Powell...
"Waiting on those cited bits of information to back the claim of riots and burning buildings instead of you just saying so. Burden of proof falls to you."
WHAT?
Now I need to back up my claims of riots and burning buildings? Is this person living under a rock? I guess so...
<iframe width="560" height="315" src="https://www.youtube.com/embed/mhr22ZKWo6w" frameborder="0" allow="accelerometer; autoplay; encrypted-media; gyroscope; picture-in-picture" allowfullscreen></iframe>
It's not surprising that this Stephen person is just blatantly ignorant of what's going on in the world. He doesn't believe that there are riots, looting and burning buildings. He must subscribe to the Jerry Nadler view of current events "it's a myth".
Instead of acknowledging my link to a YouTube video which shows Kenosha businesses up in flames, he tries to attack that I posted something from YouTube, suggesting that because it's from YouTube it lacks credibility. So I pointed out to him that every major news agency posts on YouTube and this particular video was posted by NBC. I already know I'm dealing with a moron but I just wanted to show his ignorance, more than he's already showing it himself. 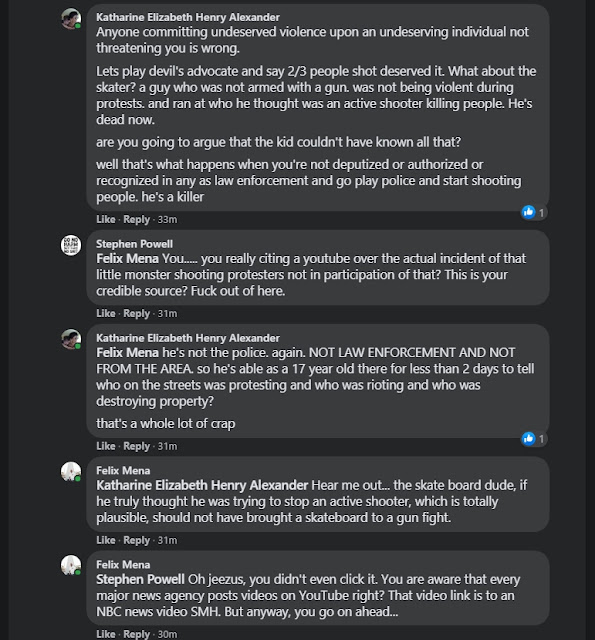 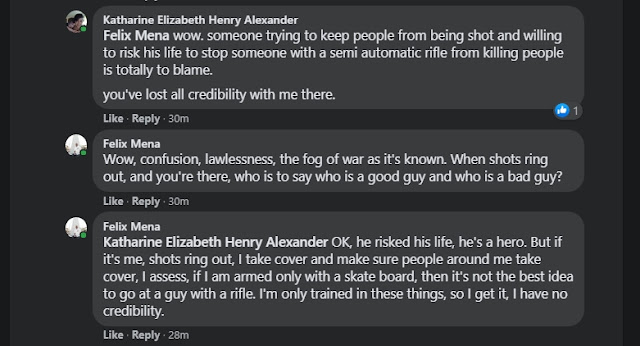 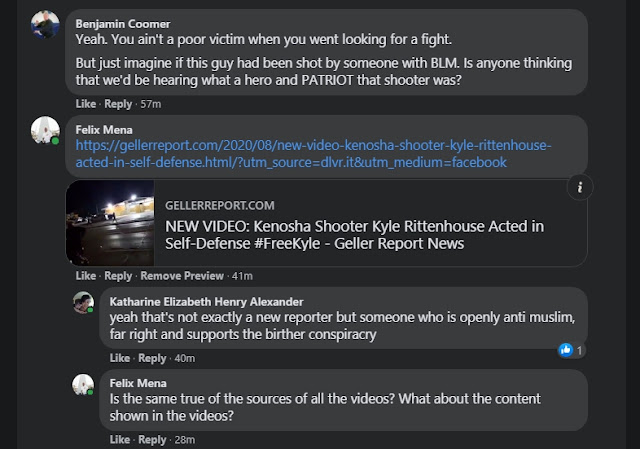 I'll conclude with the final screen shot below, in which, predictably, the lefties, when they've realized that they are shown to be flat out wrong, shown those pesky things the rest of us like to call "facts", they resort to getting down in the gutter and just name calling. At least this was rather flattering, albeit sarcastic... "smooth brain". Taken at it's face value, I'd like to think I have a rather "smooth brain". I use it to think, to assess, to analyze before formulating an opinion. Perhaps these lefties ought to try it out some time? 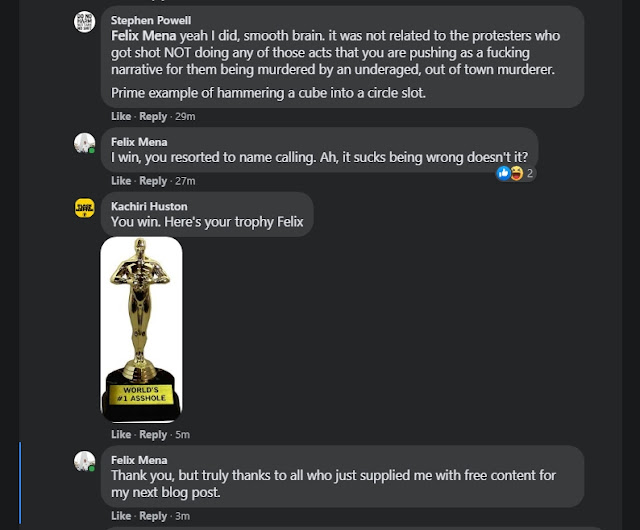 Posted by FelixGPhoto at 9:21 AM