As you may or may not know, I have been agressively searching for replacements for my 7 stolen firearms and I've been extremely successful doing so. I placed a bid last night on a Czech VZ24, and if I win the auction, replacing the Ruger 10/22 will be all that remains to complete my task. In fact, I was able to ugrade slightly (although it cost me in dollars) in a number of cases including jumping from a standard DPMS Panther Arms AR15 light to a Sig Sauer M400 which I plan to deck out with a Eotech 512 and Magpul flip-up front and rear sights, I also upgraded slightly on my Mosin Nagant M44. The one I just purchased (1946 Izzy)  is a rare DDR (Russian made - East German Issued) the one I had before was just a regular 1946 Izzy.

I am still waiting for the insurance check, so I had to dip into an old credit card that I had saved for emergencies, as collecting and shooting firearms is pretty much my only hobby, I considered this an emergency. 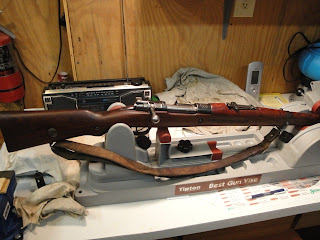 Czech Mauser VZ24
Posted by FelixGPhoto at 6:01 AM