My good army buddy Ryan, who has been featured in several of my videos (video 1, video 2) went on a bit of a bender today. He must have been bitten overnight by the mosquito that's going around lately and caught the gun buying fever. Stricken with the fever he went (I acted as his personal driver, firearms store guide and expert) to no fewer than three local gun shops today, making return trips to at least two of them, ultimately purchasing a sick and powerful Taurus .44 Magnum revolver from The Marksman in Puyallup, Wa. but also his first ever 1911, a Remington R1 1911 in an eye-catching OD Green and black color scheme with beautiful rosewood grips from my all-time favorite local gun shop, Surplus Ammo and Arms in Lakewood, Wa.

I can't give high enough praise to the outstanding customer service that I continue to receive, visit after visit to Surplus Ammo and Arms. Chester, Aaron and Jen (who works in the back of the house and handles all of my transfers) always go out of their way to take care of their customers, specifically, me. Today for example, I escorted Ryan into the shop and the Remington R1 really jumped out at him. He has made up his mind to pruchase it but did not have a copy of his official army orders on him which assign him here to Fort Lewis. A copy of his military ID and his orders are needed to establish residency in Washington state, a requirement for handgun purchases. I politely asked if they would hold the Remington until we could make the trip back to Ryan's apartment to get said copy of his orders, sure enough, Aaron was more than happy to oblige. He threw in a "we don't normally do this, but for you Felix, you're such a good customer, awesome guy, you're the best." I'm paraphrasing and embellishing but essentially, that's what he said. So that was nice.

When we came back I spoke to Jen to let her know that my Rock Island M5 shotgun had been shipped and would be delivered around the 31st and I also notified her of another impending transfer (the Ruger SP101). She mentioned that they would temporarily be suspending transfers because the store would be moving to a new location soon, but that because it was me and I'm "such an awesome guy, the best customer ever" again I'm paraphrasing, they would be happy to take care of my transfer. Thanks again Surplus Ammo and Arms, you guys are the best. I'm taking Jen one of my Guns are Fun T-shirts tomorrow as a thank you.

Along the way, we stopped by the local pawn shop where I have a Ruger mini-14 on layaway. I had purchased it the same day as the tragedy in Newtown, CT. In fact, I was in the store as the story was breaking. Prices on all rifles such as the mini-14 rose significantly in the days and weeks since then, so I was fortunate in that I purchased it before then price spike. I'll most likely pick it up on the 2nd of January, so look for some initial photos.

Speaking of layaways, Ryan put his Taurus on layaway. In a good example of why it pays to be patient and shop around. Ryan had spotted the Taurus .44 Magnum in the third shop that we visited today, but it was used and had seen it's better days. That particular store, Bullseye in downtown Tacoma, Wa. was not offering layaways for the time being and so, Ryan passed on the purchase given that it was a used Taurus and he couldn't lay it away. So we went back to gun shop number two, low and behold, they had the same exact Taurus .44 magnum revolver but it was brand spanking new and was priced only 40 dollars more than the used one that was in the previous shop and The Marksman took layaway. Done deal, he bought it.

All in all it was a fun day of gun shopping.

Here are a few stock photos of a Remington R1 1911 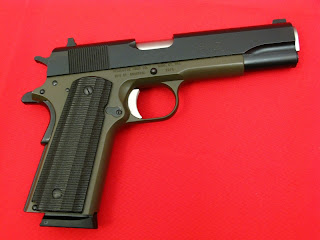 And the Taurus .44 Magnum 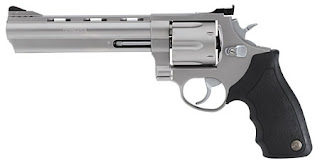 Posted by FelixGPhoto at 7:17 PM