My dear, close friends, Kevin and Lisa, recently moved to the Pacific Northwest, having settled down just outside of Portland (I guess I couldn't convince them to come further North) with Kevin having recently caught the firearms bug. He begins his collection with two outstanding .22 caliber offerings, a tactical Ruger 10/22 and a Ruger Mark III Target model. Lisa had business last weekend up here in my Seattle neck-of-the-woods and we scheduled a day at the range which was preceded by a night of sushi, drinking a jazz club and strip club! Hurray freedom!

You couldn't have asked for better shooting weather in early March in the great Northwest, the sun was out and shining bright and I brought along a fine selection of heavy-hitting artillery from my arsenal including: Ruger SP101 revolver, M1895 Nagant revolver, Smith and Wesson 3913 and 5906, Mosin Nagant 91/30, Yugo 24/47 Mauser and a newly acquired 1955 Tula SKS.

Lisa doesn't have much time behind the trigger, so we started her out on the Ruger Mark II, she handled it easy enough, as was to be expected however, she nearly lost her grip when she fired off her first round with the Smith and Wesson 3913 9mm, not that it has a tremendous amount of recoil, but the difference in recoil between those two pistols is significant, especially when you're not expecting it. All-in-all she did a great job and just needs a little professional level instruction so as to elevate her confidence and safe handling of firearms. Kevin, for his part, busted his Mosin Nagant cherry when he experienced the mule-kicking recoil of the Mosin Nagant 91/30.

As always, we had a great time at the range and I can't wait to do it again. This may have been my final outing, I leave for Korea in May. 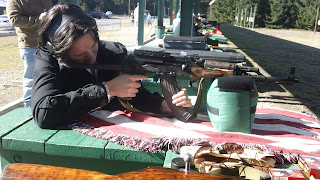 Posted by FelixGPhoto at 4:09 PM