The Curious Case of the Skyrocketing Mosin Nagant Prices

Relatively speaking, I haven’t been collecting and shooting firearms for that long, only around 9 or 10 years as of today. My first firearm, a Christmas gift from a former employer, was a Bushmaster ORC AR15 (nice gift eh?). I soon followed that up with my first handgun, a Smith and Wesson M and P 9mm, these are typical firearms for a newcomer to the wonderful world of gun ownership. But, it didn’t take long for me to discover the joys of military surplus firearms, especially given the fact that I am a self-confessed military history buff. 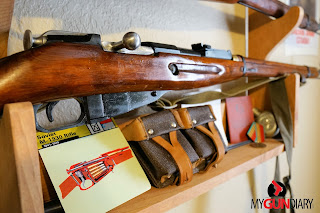 My first mil-surp was a Mauser 24/47 that I bought off a guy in one of my college classes. He happened to over hear me talking about guns with someone else in our class and mentioned he had a rifle (Yugoslavian 24/47 Mauser in 8mm) he was trying to sell. It needed a bit of cleaning up and the metal had some rust, so I offered him 50 dollars (a number which was suggested by a local gun smith who inspected the rifle for me before I bought it) and the seller surprisingly agreed, as this was well below the average price for that rifle at the time. Around that same time, I was introduced to the venerable and legendary Mosin Nagant. The year was 2010 and a typical Mosin Nagant 91/30 was selling for between $99 and $129 dollars. It was a good time to be a buyer. But then again, we always hear the clichés about the “good ole days” don’t we?

For some reason, which I still fail to comprehend, the Mosin Nagant is frequently described as an “ugly gun” or, “not much of a looker”. The other phrase I have heard often times goes something like this, “she ain’t much to look at, but she sure shoots straight!” I’m left scratching my head because the Mosin Nagant is actually quite a beautiful rifle. The stocks are often a dark, rich shade of reddish/maroon and the long, slender barrel is unmistakable.

I’m still beside myself when I think that there was a time when these rifles were not in high demand, or considered undesirable. What I’m saying is that they are absolutely fantastic, and I am not alone judging by the rising prices.

Back to 2010, I knew that I was getting a good bargain at $99-$129 so I bought myself a few of them those first couple years of my collection. Perhaps 3-4 in all, including my first M44, which unfortunately due to my bad memory (which is getting worse with each passing year) I don’t remember what I paid for, so I can’t give you an exact number, but I think it was around $200-$250.

With that in mind, let’s look at some of the prices I’ve been following in the past couple months; 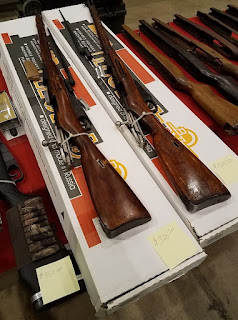 A pair of Mosin Nagants for sale at a recent gun show. (Photo courtesy of Derrick Wilkins)

A typical Mosin Nagant is now selling for no less than $100 more than what it was selling for just 7 years ago. Close to a 100% increase, some times more in some cases. That is an excellent return on any investment over the same time frame. Prices like that even have left me to consider selling some of my collection. But how much higher will prices go?
It looks like prices will continue to rise for now. My prediction is that prices will stabilize for the next 6 months but if the ban on Russian imports doesn’t bring in a massive influx of military surplus, then prices will just keep going up steadily (the Obama administration imposed a ban on Russian imports as reaction to the Russian invasion in the Crimea and their meddling in Ukraine. The new administration has yet to lift those sanctions).

I find it difficult to blame retailers. Businesses have an obligation to maximize profits without losing customer loyalty. Naturally, they will collectively be watching the market and their sales results to see what’s the most money they can get for a particular product. Used guns sales are a lot like used car sales.

Some of the people I surveyed mentioned inflation. OK, that’s one possibility. But I calculated the inflation rate for a Mosin Nagant 91/30  that was priced at $129 in 2010. In today’s dollars that would be the equivalent of $144. With most 91/30’s going for $229 and up, inflation alone does not account for the entire increase in price.

The vast consensus is that the ban on Russian imports, combined with a decrease in inventory across the USA and the increase in interest from new shooters and collectors makes for a perfect storm which results in the massive price increases we’re seen recently.

As of today, you should expect to pay no less than $229 for a 1943 Izhevsk 91/30 and anywhere from $289 to $325 for some of the more desirable 91/30’s such as any Tula or Hex receiver. For an M44 you should expect to pay $280-$300, an M38 is going to run you about the same. However, the premium prices for any Mosin Nagant variant are currently going to the 91/59 and any Finnish model (Please note that this article refers strictly to the most common Mosin Nagant’s which are Russian in origin. Other Mosin Nagants from non-Russian factories generally command higher prices). Prices for those are all over the place but unless you get one with blemishes, such as the cracked stocks Fins that Classic Firearms is currently selling, you’ll end up paying anywhere from $400 all the way up to the $600’s.

It’s a seller’s market, to say the least, however, new owners of Mosin Nagants, even if they are paying more than double what some of us paid for ours, are still getting an amazing piece of history for less than $300 US Dollars. Do I wish prices were lower right now? Of course I do! Then again, maybe part of me is just upset that I didn’t buy a couple of crates worth (20 rifles to a crate) back in 2010?
Posted by FelixGPhoto at 11:03 PM