This Sightmark Red Dot Is Trash So I Threw It Where It Belongs, In The Trash 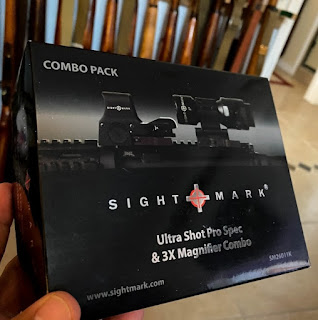 Admittedly, I had been advised by friends, and read a few negative reviews, that the Sight Mark Red Dot Ultra Shot Pro Spec and 3X Magnifier combo that I bought was not considered to be a high quality product, considering the almost infinite amount of options when it comes to selecting a red dot. But price is always an issue for me, and throw in the fact that I don't use my AR-15's for anything other than target shooting and varmint hunting, I wasn't overly concerned with my red dot having to endure rough and austere combat-like environments. I think I paid $299 for the combo, but even at that price point, I wasn't expecting that my red dot would NEVER stay secure over the course of the time I owned it, before finally throwing it in the trash.

I had my Sight Mark Ultra Shot Pro Spec red dot for about a year, and not one time did it manage to stay secure on my carbine. It didn't matter if I shot 10 rounds, 20 rounds... the recoil from ANY rounds would cause it to come loose. At first, it didn't concern me all that much, I simply tightened the nut with the small wrench tool that came included in the box. I would then return to the range hopeful that would be the end of my loose red dot troubles, sadly, I was wrong.

Again and again, I would adjust the nut, the red dot felt tight and secure, but alas, a few rounds and it would again come loose. Not one to give up easily, I asked my good friend and shooting buddy Andres, if he could bring over his bottle of Loctite. I figured that might be just the thing to keep the red dot from coming loose. Although, it shouldn't have to come to that in the first place. But the nut, which secures to the thread which also holds the quick release lever, is almost impossible to get to. Once I removed the nut and applied the Loctite, I found it quite futile to try and secure the nut back onto the thread. Because the internal housing is under spring tension, I had to wedge a small flat head screwdriver in between that and the body of the red dot so that I could expose the thread enough to try and get the nut back on, but this ended up an exercise in futility.

I'm not a rich man, if I was, I would not have to purchase a $300 red dot and magnifier combo. I could drop $1200 on an EOTech Red Dot and Magnifier Combo and not think twice about it. But I am also not poor and unemployed, and in an effort to save some dignity and release my frustration, I submitted myself to the fact that the Sight Mark red dot, which had never, not once stayed secure on my carbine, wasn't worth the time and effort I was putting into trying to get it to stay tight on my gun. I did what I thought was the sane thing to do, and into the trash it went, next to the leftover crust from a $3.99 store bought frozen pizza and an empty bottle of Gatorade, which I most likely drank as a hangover cure after a night of drinking alcohol motivated by the anger and frustration I've felt for the past year of owning this piece of shit red dot. 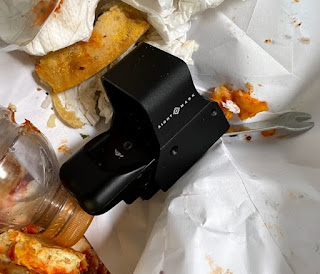 Above, a photo of my Sight Mark Pro Spec Red Dot in the trash, exactly where it belongs. 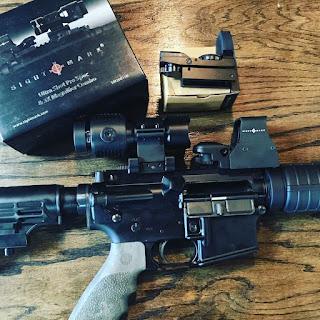 It's too bad that it had to come to this. I liked the way it looked on my AR15. I thought I had found a good value that would suit my needs. But with the rise of violent protests and angry mobs, the possibility, however remote, that I might need my AR15 in a life and death situation became more and more a reality. I simply could not have a red dot on my carbine that I could not rely on. And that's really the bottom line here, the Sight Mark Ultra Spec Red Dot, at least in my experience, was far from reliable.

My next step was to do what I should have done from the get go, purchase a red dot with a history of reliability from a brand known for high quality products. So I reached for my wallet and placed an order for a Sig Sauer Romeo 5 Red Dot. My new Romeo 5 is scheduled for delivery this Friday and I will definitely update this post with my first impressions as I'll have to take it out to the range on Saturday and zero it. I paid $149, which now puts me at $450 into my red dot magnifier combo. Maybe I should have spent more from the start right? After all, I of all people have always espoused the age old saying... "You get what you pay for". 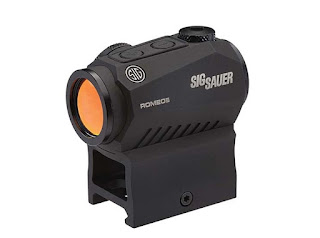 As for the Sight Mark 3X Tactical Magnifier, I have no issues to report. It's really quite good actually. If only the red dot delivered the same reliability. It slides to the side with ease, it has stayed secure on my carbine since day one which is why I have no problem recommending it and including a link to where you can purchase one. Whereas I have purposely omitted any link to the Sight Mark red dot which I would, and I cannot stress this enough, NEVER recommend to anyone.

Posted by FelixGPhoto at 3:25 PM