My Thoughts on Charlottesville, Racism and Bigotry

I've always stayed away from politics on my blog. I've always wanted to highlight the positive, fun aspects of shooting sports and firearms collecting. However, now it just seems like things are getting too out of hand to not use this modest soapbox called My Gun Diary to try and change some minds and open some eyes about the events which have been unfolding over the past few years, not just in Charlottesville, but all over America.

I realize this does not have anything to do with guns, but I felt compelled to write on the matter.

We are all one race, the human race. There are enough challenges on this good Earth, at this time in history, that require us to all work together to overcome. Hate and racism do nothing for us as a species and are simply based on ignorance and intolerance.

Neo-nazis, white nationalists, Black Lives Matter, the far left, the far right are obviously, all entitled to their opinions, heck, they can even have peaceful protests. But the line is crossed when just laws are broken or any of them infringe upon the rights of others. Destruction of historic monuments is a crime and should be prevented and punished to the full extent of the law.

Slavery is an ugly stain on our history, yes, but I believe strongly that we should still honor the history of brave Confederate soldiers because they are, after all, Americans. Are statues of General Robert E. Lee and other Confederates reminders of slavery? Perhaps, but they are still a part of our collective history and there's nothing wrong for proud southerners to want to remember these important figures in history.

To those in opposition, do they not know that George Washington was a slave owner? In fact, he owned a lot of them, 123 to be exact (1). Shouldn't we then tear down his statues?

Former Presidential candidate Gary Johnson is correct in his recent article, in stating that the answer lies in correcting the root of the problem, not in one side blaming the other (2). The questions that need answering are: How do we erase racism? How do we battle ignorance? How do we come together?

I'm not going to attempt to answer those question, I'm simply raising them.

Unfortunately, I think we are going to see more violence and stupidity because ignorance seems to be winning the battle against education, tolerance and good parenting.

I guess I was incorrect at the beginning of this blog post when I said it had nothing to do with guns because a few things caught my eye in Charlottesville. Firstly, I fully support that militia group that went to defend the constitution. Turns out they are from the Pennsylvania Light Foot Militia and are not associated with either side of the argument. They traveled to Virginia to serve as neutral peacekeepers and I have to respect that. In fact, the leader of the militia denounced the white nationalists and neo-nazis (3).

And then there was this guy... 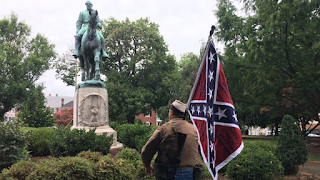 Who went to honor and salute the statue of General Robert E. Lee (4). Watch this video https://www.facebook.com/newlypress/videos/1869937286603977/?hc_ref=ARRwz48fqVU8XJFjO7GVdvyHlU_bqcRVrqgz1diPOjib9eB6SICNgv8N_jl1s4K672Q&pnref=story

The people yelling in his face are so out of touch, yelling "terrorists go home". Um, I guess they don't know what a terrorist is, but it's certainly not a guy just standing there saluting a statue. Sure he's got a Confederate flag but as someone pointed out, it's not a nazi flag and it's not an ISIS flag. I have no problem with Confederate flags and I don't think the represent slavery. The recent cliche rings true, people need to stop being offended by everything. However, this guy does have an AR15 slung over his shoulder which most definitely will trigger, and did trigger, the snowflakes.

Now then, white nationalists and neo-nazis need to realize that the beauty of America is in it's diversity, and as far as race, as I've mentioned, there is only one race, the human race. The liberals on the left need to quit being the biggest bigots in the country and let others speak and enjoy their First Amendment rights and not violently shut down every public speaker they disagree with.

I judge people based solely on their merits. Just because you don't like someone doesn't mean you have to hate them. I dislike most people. Hate is a strong word, so I use it sparingly.

I hate thieves, criminals, gang members and country music. Truly, I do.

If a white nationalist or neo-nazi group hold a rally in my town, I'm not going to block the road illegally or get in their face. I'm going to ignore them, same goes for the liberal left. If they want to hold a parade or whatever, fine, I'll just keep on watching my favorite football team, go shoot some photos of the mountains and enjoy life. If they are doing something illegally, then it's up to the authorities to clamp down on it. The organizers of the Unite the Right rally wanted to provoke a reaction, and that's wrong, the reaction of the left, which was also wrong, led to the death of that beautiful young woman. And the sicknesses we call hate, racism and bigotry led to that bastard plowing into the crowd with his car.

Who is prepared to defend the Constitution, non-violently? Where is our Ghandi?

Posted by FelixGPhoto at 5:19 PM No comments: