For those of you who don't know who C.J. Grisham is, he gained notoriety from a You Tube video which recorded his controversial arrest several years ago, while he was out walking/hiking with his 15 year old son. Mr. Grisham was legally carrying an AR15 rifle, front strapped, when he was approached by Temple PD Officer Steve Ermis. Here is the video in question...

A follow up video features the original phone call to the Temple police non-emergency line made by a citizen who happened to drive by Mr. Grisham and his son as they were walking, and decided to call the police as a result of seeing a man with a rifle. What I found striking about this phone call is that at no time did the officer who took the call, in form the caller that carrying a rifle in the State of Texas is LEGAL nor did he ask any follow up questions. Someone is seen with a rifle, they dispatch an officer, end of story. https://www.youtube.com/watch?v=2etnNGFYBxc

The saga of his arrest as it has progressed through the courts, as I see it, is a complete miscarriage of justice. Charges were changed (from Resisting Arrest, to walking on the wrong side of the street) until they found a charge that would stick. That, combined with a biased judged and two trials, resulted in a guilty conviction for interfering with police duties, a class B misdemeanor. Now, if you have any doubts that this case was nothing more than personal and that Mr. Grisham was being bullied by the police and the prosecutor, think about this. The prosecutor decides to retry the case, for a class B misdemeanor, not a felony, but a misdemeanor. In the end Mr. Grisham had to pay a $2000 fine which he paid in nickels. Good for you! However, he is appealing the case and I would be quite alarmed if it wasn't overturned. 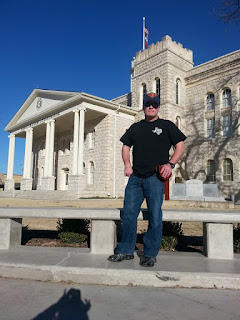 It seems to me, after watching the infamous video of your arrest while legally exercising your right to open carry, that one of the most pressing issues would be educating police officers about the law. How do you propose to improve the education of law enforcement officers as to the law? For example: in your specific case, you were doing nothing illegal, yet you were detained, disarmed and arrested.

The video itself, as well as several more from around the state, served as a major educational effort. We began open carrying rifles everywhere around the state and basically forcing it down their throats until they got it. At the same time, I was personally working with many departments around the state and providing free training seminars which were very successful. When I founded Open Carry Texas, I ensured that our mission statement reflected the need to work with law enforcement to minimize negative encounters. As part of our policies, our members had to call law enforcement ahead of an event just to inform them in case they got calls. Within six months, that was no longer necessary as TCLEOS also began sending training and awareness information to Texas police departments.

Do you believe that in your particular case, had the officer in question been better educated about the law, your confrontation with him might have unfolded differently? How?

I'm not sure if the encounter would have been different. The particular officers involved in my arrest have a history of bullying people. They just always got away with it prior to meeting me. I don't like bullies at all. Additionally, the officer lied to his supervisor and on his reports about what happened. This was a case of a bad cop that encountered resistance to his illegal actions and he did what all bad cops do: he lied to cover up his ignorance. I'm honestly not sure if anything would have changed that encounter for those reasons. Now, if he had been many other cops in TPD, I think it would have ended much differently and you would never even know who I am.

Why do you think law enforcement agencies have an apparent bias against law-abiding citizens who are open carrying legally?

In my opinion, it's because it threatens their perceived power. When the citizens are visibly armed, I think many cops realize that they are no better than everyone else. For many, it's an ego thing where they enjoy getting to do things most people can't. Not all cops, mind you, but a good number. They've also been lied to about who the enemy is. They look at every citizen as a threat instead as just citizens. As such, when they see the enemy - us - they feel threatened. We need to reverse that mindset. Not only does it put the public safety at risk, but it creates paranoia in our nation's police force. This is drilled into their heads in police academies across the country, so we need to address this first. This mentality of "You job is to go home at night" creates an "us vs them" atmosphere. When I was in the military, I put myself in danger to ensure innocent people got to home at night. My safety was the last thing on my mind. If cops are in it for self-protection, they're in it for the wrong reasons.

I would say 80% of my interactions with cops are very positive. Another 10% starts off apprehensively then calm down. The remaining 10% are extremely contentious. Those are generally the bullies and holier-than-thou cops. Like with Ermis, I take them down a notch or two. I have learned to record EVERY encounter with police, good or bad, for my protection. While a few still want to play the fool, most will correct themselves when the camera comes out. Since my initial arrest, I've had about 100 encounters with cops and nearly all of them were positive. One resulted in another false arrest in Austin in which the charges were dismissed and we are suing the department and officers (https://youtu.be/my79AFSBjJI). One resulted in having actual assault rifles pointed at me (https://youtu.be/xfK1fJhZX7g). Others I simply told the cops I'm done talking to them and walked off. Our Open Carry Texas YouTube channel has examples of good and bad cops.

Do you believe that 911 operators have a responsibility to also know the law and to inform someone who calls 911 of the law? For example: Person A looks out their front window and sees person B walking down the street with a rifle slung over their back. They are alarmed and call 911 to report it.

Another part of our education effort has been focused on 911 call centers. We have successfully gotten every call center trained in asking follow up questions to protect law-abiding gun owners. TCLEOS was a major factor in that once they recognized that was center of gravity for how encounters would play out. Yes, they bear a HUGE responsibility in asking following up questions to protect both the officers and public. The more cops know, the less aggressive stance they will take.

Concerning your case... Are you pursuing civil litigation against the officer(s) or the department for violating your civil rights? If so, how is that progressing?

In the Temple case, I did sue the officers. However, because the prosecutors chose to keep changing the charges until they could secure a conviction and I was convicted, the judge tossed it out. He said since I was convicted the officer obviously did nothing wrong. The problem is that the law only gives you two years to sue, regardless of whether your appeal has been ruled on or not. When the appellate court overturns my conviction, I will again file a civil suit. In my Austin arrest, I overcame the claim of qualified immunity that cops always use. Since I was carrying a toy gun and the officers KNEW it was a toy gun, they had no basis for the arrest and willingly arrested me. We are in the deposition process now for that case.

How would you advise people to act if they found themselves in a situation similar to yours? (i.e. they are legally carrying a rifle or now open carry of a handgun with a license).

I would advise people to be as calm as possible. That's a difficult thing to ask because when you're faced with someone with a gun a badge, there is a high level of anxiety. Everyone responds to stress and anxiety differently. It's the fight or flight mentality. My response is to fight which is why I tend to get mouthy. I don't mean to, it's just how I manage stress. I don't bottle it up. Some people are able to be very calm during an encounter. So, my advice is to be as calm as possible and record everything. If you're going to open carry you MUST be well versed in the law. If you don't know the law, you can't defend yourself in the streets. If you give the impression the cop knows more than you do, he will use it to his advantage. I have memorized Texas law and can literally write chapter and verse. I put every cop on notice that if he continues, he is willingly and knowingly violating my rights. When you tell him that, he realizes he's setting himself up for failure if he continues. I'm about to put up a video of this I action when I was pulled over on a traffic infraction and the cop wanted to disarm me during the stop. I refused and I prevailed even though she called in five cops as backup.
What can the average person do to support gun rights and promote education about the law as it stands today?

EXERCISE YOUR RIGHTS! When you don't exercise your rights it's easier to lose them. One of the things about open carry is that by itself it is educational. For too long, the American people have been conditioned to fear the sight of a gun. By exposing the public to seeing guns in public, it directly confronts that mentality and forces people to get used to it. That's what we did with rifles. Within six months, the 911 call rate virtually disappeared because people got used to seeing them and knew it was legal. We have to directly confront the narrative that guns shouldn't be seen in public because all that does is perpetuate the ignorant fear of them. We also need to stop spreading these baseless myths about open carry being confrontational, making you a target, or somehow surrendering the tactical advantage. These are all tactics the anti-gunners jump on and as gun owners spread they will seek every avenue of exploitation and we can't give them any. Gun owners should stop attacking those that open carry because it furthers a wedge issue the liberals can focus on.

I am tempted to join in on a future Open Carry Texas rally, it's a big decision, however, because it takes a tremendous amount of courage to stand up for your rights the way C.J. Grisham does. You put yourself at risk of getting arrested, perhaps even putting your life in danger. I appreciate what citizens like Mr. Grisham are doing to defend our rights.
Posted by FelixGPhoto at 10:33 AM