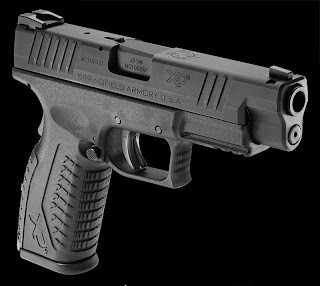 On August 8th 2008, I joined the United States Army at the ripe age of 39. I had parted ways with my Bushmaster ORC and my Smith and Wesson M & P 9mm because I needed the cash and I had no where practical to store them while I was away at basic training and advanced individual training. But once I settled in at my first duty station at what was then called Fort Lewis (now known as Joint Base Lewis Mcchord), I enthusiastically began to (re)build my arsenal. After a few months of research and contemplation, I decided that my first pistol (which is actually my second, the first being the Smith and Wesson M & P which I had previously sold) would be Springfield XDM .40 cal.
I chose the XDM .40 for several reasons. Firstly, for self-defense purposes, I wanted a caliber that I knew would hit hard. Not that the 9mm isn't up to the task, but when I asked myself what caliber I would really want if my life was ever truly in danger, the answer was the 16 rounds of .40 caliber that the XDM carries.
Secondly, I felt extremely comfortable with the ergonomics of the M & P. I had put a few rounds down range with a loaner XDM at The Marksman indoor range and felt it offered a grip equal to, possibly slightly better than the M & P. With the addition of sand black decal grips that I ordered from Cheaper Than Dirt, I had, what was for me, the perfect self-defense pistol.
I have since begun to conceal carry a different pistol, obviously the XDM is a little bulky to holster in the small of my back or at my side, but she's still the handgun I keep within reach when I go to sleep at night.
Posted by FelixGPhoto at 3:18 AM