'Tis definitely the season to be jolly, especially now that my Kimber Pro Carry II .40 caliber is finally, at long last, after much grief and anxiety, finally working flawlessly. I purchased the Kimber almost the moment I stepped foot back in the United States after my deployment to Kuwait, and have been having problems with it ever since, that is, until today.

Just in case you want to follow the story from the beginning, here are the links to each post about it, in chronological order:

I was extremely close to making up my mind to sell the darn thing, especially after my last trip to the range which resulted in a failure to feed with each and every magazine, even after I had the feed ramp polished at the gun smith. I took my attempts to fix the problem a step further two weeks ago when I purchased a new recoil spring, but when I disassembled the Kimber to replace the spring, I noticed that the new spring I purchased was much longer than the one that was on the Kimber. I figured I had bought the wrong size spring, so I took it back.

I went online and found a new recoil spring (it came bundled with a new firing pin spring) and there was no room for error as this was absolutely the correct spring, yet, when I disassembled the spring, again the new spring was longer. I deduced then, what I had previously suspected but dismissed, that the spring that was installed on my Kimber when I bought it was the wrong size. It had to be. And sure enough, as you see in the  video, when I took it out to the range today, it functioned flawlessly! I put three different kinds of ammunition through it, not one single problem.

Prior to replacing the recoil spring, I had decided to put grips on the Kimber that matched it's rebellious, troublesome attitude. You can see the new grips in the photos below.

Here is the link to the seller on GunBroker.com that I ordered the grips from - Click here. 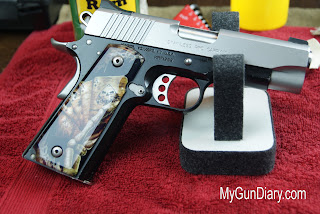 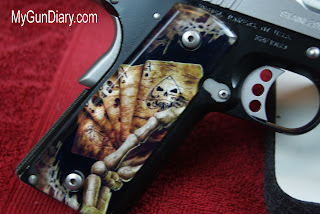 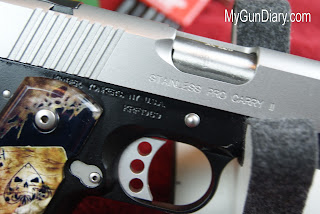 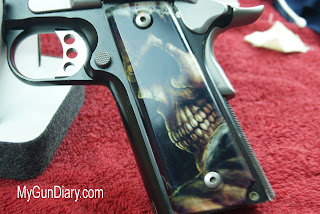 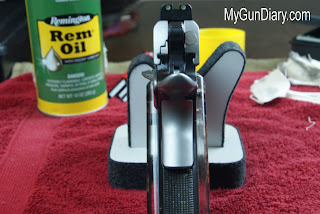 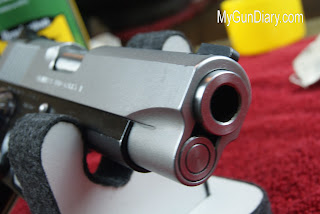 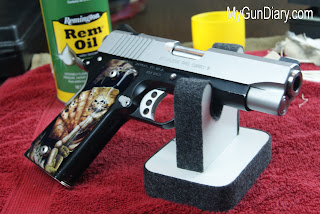 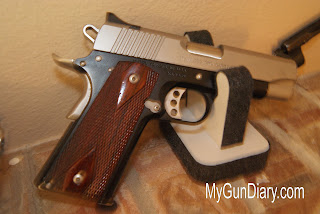 Posted by FelixGPhoto at 7:00 AM